The Golden Keys Quartet was a long-standing "weekend" quartet. This group from Portsmouth, Ohio was formed in 1945. They were originally known as the Campmeeting Boys. The original members were Jim Hill, Harold Patrick, and John Conley. In 1947, a fourth member was added to the group and they became known as the Golden Keys Quartet. The quartet was a very popular group in and around the Ohio area for many years.

First tenor Jim Hill and second tenor Harold Patrick were soon joined by baritone Pat Duncan and bass Clarence Claxon. Harold Patrick also played the piano for the quartet. This personnel began to expand their music outside their home area and become well known in the gospel music circles. Except for a short time that Hill spent with the Ambassadors Quartet, this lineup remained intact for many years.

The Golden Keys Quartet soon grew from a local part-time group to one that became quite active in the gospel music field. They were one of few part-time groups invited to perform at the National Quartet Convention. Their vocal arrangements were not extremely challenging, but the emotion with which they presented their songs made them a very exciting group from the stage.

Jim Hill, manager of the quartet, grew up in Portsmouth, Ohio. Jim studied opera and auditioned with the Cincinnati Conservatory of Music and the Metropolitan Opera Company. However, his background in church music prevailed, and he continued in his quest to perform gospel music.

The Golden Keys Quartet continued with the same personnel for several years. This led to an outstanding vocal blend and a great working relationship. Their programs often showcased the exciting tenor vocals of Jim Hill on sacred classics such as "The Ninety and Nine," "I Walked Today Where Jesus Walked," "God Bless America" and "The Stranger of Galilee."

The group performed many top gospel songs of the day, but their real forte was performing the new compositions of Jim Hill. Jim Hill wrote the gospel music classic, "What a Day That Will Be" in the early 1950s. It was first presented by the Golden Keys Quartet and first recorded by the Homeland Harmony Quartet. Jim is a very humble man and at first didn't realize the impact of this great song. It became one of the most requested songs by the Golden Keys Quartet. Soon many other professional gospel quartets added the song to their programs. The Speer Family had a very popular arrangement of the song and Ben Speer eventually published it. It will forever be associated with Jim Hill.

The popularity of the Golden Keys Quartet may have eventually led to their disbandment. All of the members had full time jobs, but the requests for bookings continued to come in. Although they were in great demand, it still wasn't enough for the group to become a full-time quartet. However, Jim Hill felt the calling to full time gospel music, and accepted the call from Doyle Blackwood to join the "New" Stamps Quartet in 1962. Jim's dynamic vocal talent led the Stamps to even greater heights in the gospel music community. It has been said that the Stamps first Skylite recording with Jim Hill, "What a Day That Will Be," was by far the biggest selling album at the 1963 National Quartet Convention when it was first released for sale.

hi-res
1959 What A Day That Will Be (Golden Keys Records/SRLP 2001): How Great Thou Art; He Set Me Free; I'm So Glad I Got Acquainted; Jesus Is All The World To Me/There's Only One Who Is Jesus; What A Homecoming Day That Will Be; What A Day That Will Be/How Beautiful Heaven Must Be/I've Got A Longing To Go; Pass Me Not/The Stranger Of Galilee; Tenderly; His Eye Is On The Sparrow; To Me It's So Wonderful; Hide Me Rock Of Ages; The Love Of God; The Wonder Of It All; He Bought My Soul At Calvary (Jim Hill, Harold Patrick, Pat Duncan, Clarence Claxon). 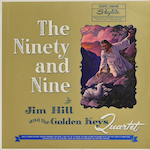 hi-res
1960 The Ninety And Nine (Skylite Records/SRLP/SSLP-5984): The Ninety And Nine; I Found The Answer; Love Is Why; I've Been To Calvary; The Joy In Serving The Lord; Until Then; The Unclouded Day; I'd Rather Have Jesus; His Name Is Wonderful; Jesus Is Leading Me; I'm In Love With Jesus; God Bless You, Go With God (Jim Hill, Harold Patrick, Pat Duncan, Clarence Claxon). 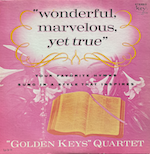 hi-res
1963 Wonderful, Marvelous, Yet True (Key Records/Lp-St 11): How Long Has It Been; What A Precious Friend Is He; Heaven Our Home; Lovest Thou Me; The Old Fashioned Meeting; Nobody; One Of These Days; Just A Little Talk With Jesus; Wonderful, Marvelous, Yet True; The Miracles Of His Love; He Hides Me Behind The Cross; Lord, I'm Coming Home (Jim Hill, Danny Gaither, Pat Duncan, Clarence Claxon, Harold Patrick). 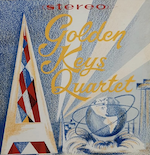 hi-res
1965 Our Changing World (Custom Records): It's In Your Hands; Are You Ready To Go; When Jesus Breaks The Morn; Dear Jesus Abide With Me; The Only Way Home; After Awhile; He Touched Me; When He Set Me Free; Without The Love Of God; I've Been Born Again; Sweeter Than The Day Before; I'm Coming (Dean Hickman, Danny Gaither, Pat Duncan, Clarence Claxon, Harold Patrick) 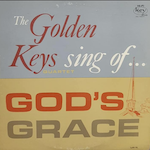 hi-res
1966 God's Grace (Key Records/LPM-70): No One But Jesus Knows; Blow Your Trumpet Gabriel; I Sought The Lord; His Grace Reaches Me; The Day He Died For Me; When They All Get Together With The Lord; Come Hold My Hand; Open Your Heart; Who Am I; Faith Unlocks The Door; You Sho Do Need Him Now; The Haven Of Rest (Dean Hickman, Harold Patrick, Pat Duncan, Clarence Claxon).