When the quartet released their debut album with Daywind Records in 2000, group members included Robbie Hiner (tenor) who was music minister at Thomas Road Baptist Church where Falwell pastored at the time, Wyatt Wilson (lead), Jeff Stanley (baritone), and Christian Davis (bass). That first CD included a novelty song titled “The Dream” that also featured Gold City Quartet. In the song, bass singer Christian Davis dreams both groups meet their demise and end up in Heaven where he and Tim Riley are forced into a bass singing contest with the loser being converted into a soprano singer. An extended concept video was also filmed at Thomas Road Baptist Church. Beverly Lowry (Mark Lowry’s mother) portrays a star-struck fan in the video. 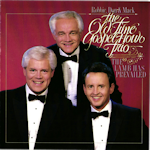 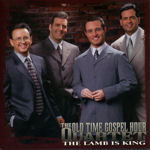 hi-res
2000 The Lamb Is King (Daywind Records/DAY1230D): There's A Brighter Day; Valley Of The Shadow; When I Don't Know How To Pray; Bad News For The Blues; I'll Rest At His Feet; Bloodline To The Cross; Jesus Is The Living Water; Breath Of Life To Me; It's A Grand And Glorious Feeling; It Has Always Been The Soldier; The Dream; Sometimes I Get Homesick; The Lamb Is King (Robbie Hiner, Wyatt Wilson, Jeff Stanley, Christian Davis). 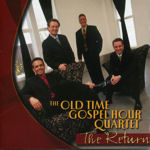 hi-res
2002 The Return (Daywind Records/DAY1291D): The Return; Jesus, Jesus; On My Journey Home; Where Our Rivers Meet The Son; His Love; In That Blessed Land Of No Tomorrows; Dancing In The Fire; That's 'A How I Know; In The Midst Of This Valley; He Is Always There; The Other Side Of The Cross; His Strength Is Perfect (Robbie Hiner, Wyatt Wilson, Jeff Stanley, Christian Davis). 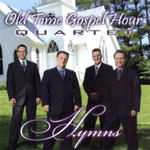 hi-res
2004 Hymns (Song Garden Records/SG-403): Come And Dine; Tis So Sweet To Trust In Jesus; Nothing But The Blood; Victory In Jesus; There Is A Fountain; Send The Light; In The Garden; The Old Rugged Cross; Just Over In The Gloryland; Where The Roses Never Fade (Robbie Hiner, Wyatt Wilson, Jeff Stanley, Jeff Pearles). 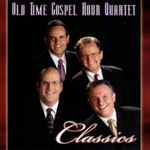 hi-res
2004 Classics (Song Garden Records): I Wouldn't Take Nothin' For My Journey Now; The Lighthouse; Canaanland Is Just In Sight; The Old Ship Of Zion; A Wonderful Time Up There; Mercy; When I Cross To The Other Side Of Jordan; He Touched Me; Give The World A Smile; Sweet Beulah Land (Robbie Hiner, Wyatt Wilson, Jeff Stanley, Jeff Pearles). 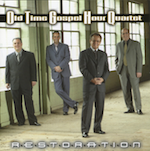 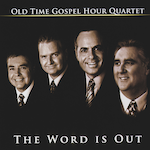 hi-res
2007 The Word Is Out (Custom Records): The Word Is Out; Under The Blood; I Won’t Trade My Crown; He Loves Me So; One Of These Days; But God; God’s Not Finished With Me Yet; Til The Storm Passes By; One Step At A Time; There Is Peace; Waiting For The Day; Until The Time Comes To Leave (Tony Jarman, Wyatt Wilson, Ron Grimes, Jerry Pilgrim).